Dan’s Whetstone was founded by Dan Kirschman over 40 years ago. After graduating from the Colorado School of Mines with an Engineer of Mines Degree, Dan began working as a mining engineer. Through the years, Dan worked in various parts of the country eventually moving to Hot Springs, Arkansas where he worked as a mining representative and traveled all over the world. While living in Hot Springs, Dan developed a fascination with the Novaculite rock that is used to make whetstone. He even began cutting and finishing the stones as a part-time hobby. Naturally during his travels Dan carried some of his handy work with him and began to notice that there was a need and demand for the whetstones. With the help of his family, the business of making whetstones began in earnest and has grown and grown.

In the beautiful Ouachita Mountains near Hot Springs, Arkansas. Dan’s Whetstone owns over 500 acres of mineral properties and controls several quarries that supply the various grades of Novaculite that they use. According to reserve projections these will supply the next four generations or more with all the 100% real natural Arkansas Novaculite needed to continue providing product for years to come.

Novaculite is a sedimentary rock composed of micro-crystalline quartz. It is a high-purity silica, composed of more than 99 percent pure silica. The name is applied mainly to formations in Arkansas, Oklahoma, and Texas and is derived from the Latin word novacula, meaning razor stone. Novaculite is the rarest and finest abrasive stone in existence. Found in depths of 250 to 900 feet, Novaculite was formed during the Mississippian and Devonian ages (about 350 million years ago). The stone naturally resists erosion and forms prominent ridges in the Ouachita Mountain range. Mining records indicate that settlers in this region began mining in the early 1800’s. Before the Europeans came to know Arkansas whetstones for their unique and superior sharpening and abrasive qualities, the Native Americans of the region gathered and quarried for Novaculite to make weapons and tools like arrowheads, spearheads, knives and axes. This process is known as Flint Knapping. There is evidence that trading between the tribes resulted in the distribution and use of Novaculite hundreds and maybe thousands of miles from the source.

Arkansas whetstones can be found with any of the following colors: pink, gray, rust red, black, blue-black, white, brown, purplish red. At times, one will find a combination of some of these colors in the same stone. Color however, does not distinguish the difference in the hardness of the stone. With a trained eye color can be used as one factor when distinguishing between grades of stone. But, only when used in conjunction with other indicators such as opacity, texture, luster, weight and mining formation. Using only the differences in color during the grading process is not a reliable indicator of stone grade.

The following are the four basic grades and their uses:

Soft Arkansas (Medium) is the most popular of the grades of Novaculite. It is an all-purpose stone used by woodcarvers, sportsmen, butchers, commercial knife sharpeners and even housewives. This stone is used by people who desire keen, sharp edge on their knives and tools in a minimum amount of time. Soft Arkansas stones may be white, gray and black, or pink and gray in color.

Hard Arkansas (Fine) is most suitable for fine polishing and the maintenance of a fine edge on knives or tools. Hard Arkansas is often referred to as “White Hard.” However, users should be aware that Hard Arkansas often has color variations also. To our knowledge, this color does not interfere with the honing process by any means. Hard Arkansas stones are popular among woodcrafters and a variety of industries including the dental industry.

True Hard Arkansas (Extra Fine) is the finest grade abrasive available today. It is most commonly used for industrial applications where an extremely fine polish is required. True Hard Arkansas stones are often referred to as Multi-Colored Translucent; colors, both opaque and translucent, are random and may include black, red, white, and gray–often within the same stone.

Translucent Arkansas (Extra Fine) stones are classifications included in the True Hard Arkansas grade category according to specific gravity under density standards. The reason there is a classification in this grade is because of color preferences by customers. Translucent stones may be a uniform, translucent shade of gray, white, yellow, brown and sometimes even pink.
Black Arkansas (Ultra Fine) Black Arkansas stones are black or blue-black in color. This crypto-crystalline novaculite structure is the densest and therefore has the properties to achieve the finest polished edge possible.

Go Back to the Basics with America’s Original Sharpening Stones – Natural Arkansas Novaculite. 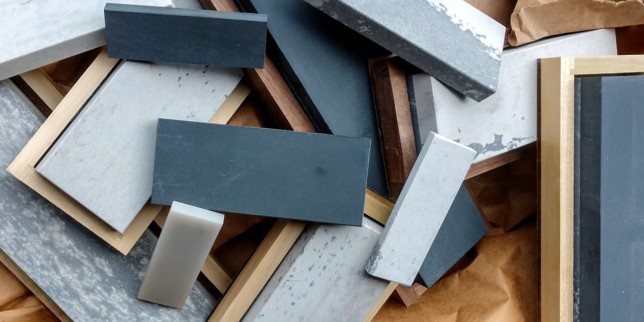