The Higo no Kami is unique to Japan and to the world of cutlery. Although there are other friction folders like Opinel and its predecessor Nontron, the Douk Douk, and the Svörd Peasant knife, the Higo no Kami is a design on to itself.

Japan’s traditional pocket knife, the Higo no Kami knife, begins in 1896 when a knife maker named Teji Murakami from Hirata in the Miki region took what was very simple folding knife design that did not feature a device to lock the blade and added a lever to the blade, thus giving the knife the look it still has today and ensuring its commercial success. Some sources mention a second bladesmith, Shigeji Nagao was influential in its development. His name will appear again later.

The story of the Higonokami intertwines with the tormented history of Japan during the past two centuries. In the middle of the 19th century, threatened by the canons of the Commodore Perry’s US Navy’s gunships, the Empire of the Rising Sun was forced to open its borders to the rest of the world. Japan went through tremendous change, having to evolve from a feudal society to become a modern industrial state or risk being colonized. In 1877, the last battle between an opposing party of rebellious samurai and the modern army of the emperor (as in the film, The Last Samurai) took place. Having been defeated, the samurai were stripped of their privileges and lost the right to carry their swords in public places. In consequence, many swordsmiths lost their main source of income, and started to make knives, woodworking tools, scissors and shears, gardening implements, etc. A group of these smiths settled around Miki, a region with a lot of rivers and iron ore sands that became the historical birthplace of the Higonokami.

The name of the knife is strongly related to these events. “Higo no Kami” in Japanese means “Lord of Higo”. Higo is the old name of the Kyushu province, where the original knife came from, but “Higo no Kami” is also an aristocratic title historically given to powerful samurai. During this time, Matsudaira Katamori was the acting Lord of Higo; he was also the very last one.

In 1899 a knife maker’s guild was created in Miki and in 1907, the name “Higonokami” was trademarked. Only the members of the corporation could manufacture the knife.

The tale of the Higonokami changed into a success story. Despite its simple and basic design, the knife had some outstanding qualities, it was very sharp with a quality San Mai high carbon steel blade, was easy to sharpen, inexpensive and over 50 makers were manufacturing it at the time. Children carried them in their school bags, the utilitarian pocketknife of every day. Pencils sharpening contests were even organized, with rewards for the fastest.

The knife survived the lack of raw materials during WW2 and the following US occupation, but its ‘coup de grace’ took place in 1961 when a 17 years old mentally disturbed youngster murdered the head of the socialist party by slashing him in public with the same kind of sword that has been banned almost a century earlier. An unprecedented and hysterical anti knife campaign went through the country, it became forbidden to take the Higonokami knife to school as tough knife laws were adopted that restricted the carry of knives.

This was a hard blow and the Higonokami almost disappeared and if it survives today it is because of knife lovers or of people nostalgic of their childhood, who kept the flame alive. Today, the knife has lost its popularity and a lot of young Japanese do not even know anything about it.

As “Higonokami” is a trademark and only the makers belonging to the corporation in Miki can use this name, which are the real Higonokami among all the different models on the market? Regrettably, there is only one maker left in the guild, all others have stopped making them. There is only one man left who manufactures the real Higo no Kami knives—Motosuke Nagao, established in Miki, descending from four generations of blacksmiths and whose ancestor was Shigeji Nagao mentioned above. Nagao’s sucessor has yet to be named, and as he is aging, some fear that the trademarked Higo no Kami will be lost forever.

Like the Douk-Douk, there is some novelty in its origins. The cultural significance makes it a refreshingly non-Western tool to possess. That it was beloved by former samurais is also a powerful reminder of the impact knives can have on the lives of their owners. 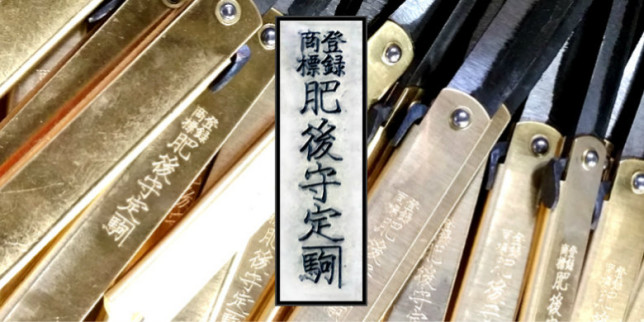