CLOSED DUE TO COVID EXPOSURE. We will hopefully reopen on Wednesday, January 26. Thank you for your understanding.

Any fisherman should instantly recognize the name Rapala, since most of us have lost enough Rapala lures in the brush to fill our tackle boxes several times over. Rapala also makes fishing knives, which tend to stay around much longer. Although most are not collector quality, economical Rapala knives survive rough treatment and bad weather.

In the 1930′s a Finnish fisherman named Lauri Rapala spent some time watching fish instead of trying to catch them in the same old way. Lauri observed predator fish charging into schools of minnows and targeting the ones that wobbled a bit — wounded minnows are easier to catch. Lauri thought that if he made a fishing lure with the action of a wounded minnow he might catch more fish, and Lauri was right. Of course he didn’t get it to work properly until 1936, when his whittled cork lure plated with tinfoil from a chocolate bar actually did catch something — 600 pounds of fish in one day. Starting with that one lure Rapala developed into a world-wide corporation with famous lures like the Shad-Rap that still catch world-record fish. As the company expanded, becoming the Normark Corporation, Rapala’s Fish ‘n Fillet knives put appropriate cutlery into the hands of fishermen, providing anglers with fillet and utility knives designed for use in the outdoors during the wettest, coldest, and most slippery conditions.

Once again capitalizing on their knowledge of fishing, in 1967 Normark owners, Rod Weber and Ray Ostrom, brought out a fillet knife, one modeled after a well-worn butcher's knife. Weber had to convince Finnish knife maker Lauri Marttiini to take on the task of fabricating the very thin, flexible blade he envisioned. When the Rapala Fish 'N Fillet Knife hit the market, it quickly became a popular item, producing more than 40 percent of Normark revenue for a time.

The average Rapala fillet knife doesn’t look like much, with an oversized rubberized plastic or wooden handle, a slender flexible stainless steel blade, and a belt sheath of hard plastic or molded leather. Even the average Rapala works well, allowing precise cuts that follow the bones of the fish and put more of the catch on the dinner table. Simply put, Rapala products make better fishermen. Nothing rushed to market, but carefully crafted from years of experience. No shortcuts. No gimmicks. It is a legacy of unwavering quality that can be seen in every fillet knife. 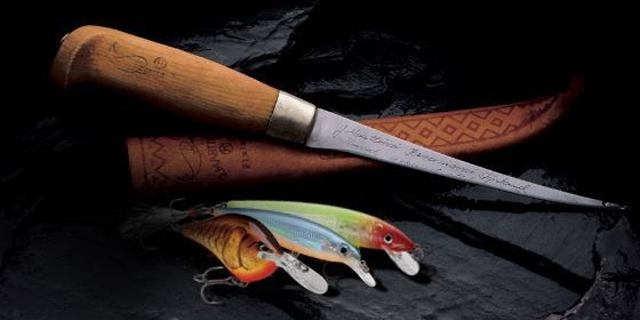