We will be closed on Friday, October 15 @12PM and all day on Saturday, October 16 as we will be attending a family event. We will re-open on Monday, October 18 @9AM. Thank you for your understanding.

In 1919, Anna David who lost her husband during the war, decided to partner with his brother in law and found the Peylaire David Society for manufacturing cutlery. This initiative was quite modern for the time. Indeed, manufactures cutlery employ workers, who are working generally at home, each specialized in mounting or polishing knives. Admittedly, at first, the workshop is made up of many little things: a great millstone to grind the blades, a small bench for mounting the knives, and some molds used in a hot forming the horn for knife handles.

In 1947 his two sons, Roger and Maurice, returning from Germany where they had been taken prisoner, took over the company. Their partnership gave a tremendous boost to the company. They built a factory in the village of Lombard. All the families of this village are involved in the development of the factory, and in 1950 more than fifty people work there. In the 1960s, with decolonization, many markets disappeared. Cheap knives that they made for these markets did not attract customers anymore.

In 1971, Robert, Maurice’s son, took over the business to create the eponymous brand. His credo was to follow the market’s innovation and adapt the product to it. He was the first to add new materials, such as olive wood and stamina for the Laguiole’s handles, in addition to the traditional in pressed horn or rosewood. He sees the enthusiasm of the public for the Laguiole knife and opened his first shop in 1983 in Thiers. Robert does not hesitate to create new forms of Laguiole, as Lag Lock the Folder Lag and Lag Liner and make them in Japan, which had the best technology.

In the late 1990s, the Laguiole market, the main business of Robert David begins to decline. With the creation of the knife ‘Le Thiers,’ Robert David decides to focus on local manufacturing. This initiated a restructuring the company. Ant this time, Robert decided to have his daughter Caroline and her husband Stéphane Brossard take over the business.

Today, Robert David Coutellerie make a wide range of cutlery specializing in Laguiole and Le Theirs patterns handmade with traditional craftsmanship and modern techniques. A century of know-how and tradition they guarantee you a quality knife. 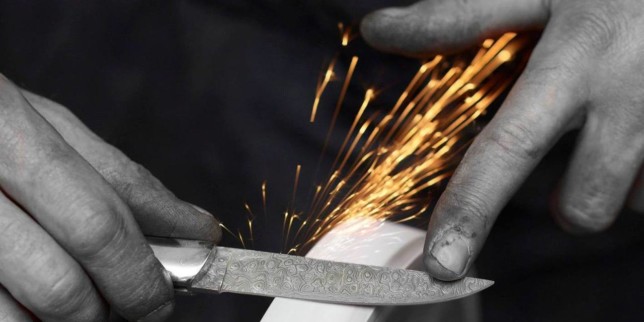