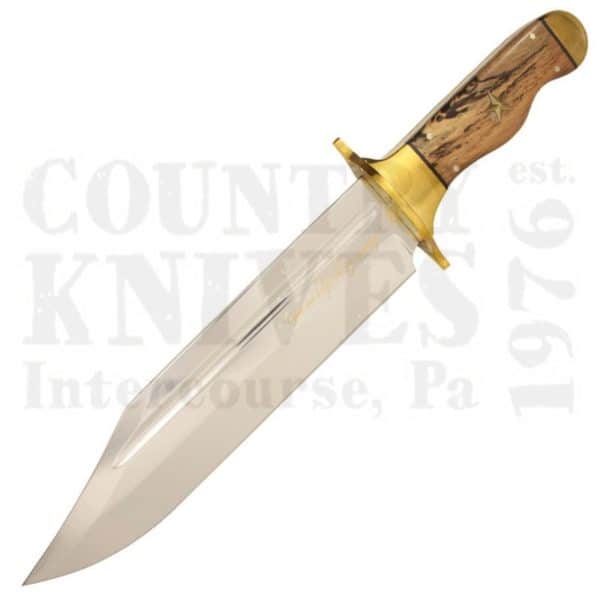 Gen. D. Antonio Lopez de Santa Anna’s men outnumbered Col. William Travis’ troops 6,000 to 200. Before noon on March 6th, 1836, Travis, Jim Bowie, David Crockett and the remaining defenders fell, making the ultimate sacrifice for their families and the future of the Republic of Texas. The handle of the Alamo Living History Knife is made from a large limb of a live oak that grows on the Alamo grounds.

Before this knife was made, designer Jerry Fisk visited the Alamo. He wanted to get a firsthand feel for the history of the place and the rare live oak wood that would be part of his creation. The Alamo knife defines both his passion for history and a turning point in the American Story. The wood used in the handle of the Alamo knife was a large limb on a live oak tree that grows on the grounds of the Alamo. In the years following the Battle of the Alamo, the Daughters of the Republic of Texas planted several live oaks at the shrine to refurbish the battle stricken historic site. Only the wood of a dead limb was used, as the live oak continues to stand in silent testimony to the courage and bravery of every man who fought in the Battle of the Alamo on March 6, 1836. In 2003, American Forests in conjunction with the Alamo site harvested wood from a dead limb for use in this project. The live oak continues to stand at the Alamo in observance of lives lost in prolific times.

In 1822, Stephen Austin led the first American settlers to Mexican Texas. The settlers had little in common with the Mexicans – language, religion, or customs – and they lived in fear of one culture dominating the other. By Fall 1835, Austin wrote, “War is our only resource,” referring to the new dictatorship of General Lopez de Santa Anna and his brother-in-law, General Perfecto de Cos. A confrontation was inevitable when garrison forces left less than a hundred men to protect San Antonio against Mexican cavalry. Those who came to protect the town were legendary Jim Bowie with nineteen men; Col. William Travis with twenty-five men; and frontiersmen Davy Crockett and twelve Tennesseans. In total, 180 men entrenched at The Alamo, a mission established in 1718, and faced 5,000 of Santa Anna’s troops. From February 24 until March 6, 1836, The Alamo was under siege and attack, ending with the Texans firing one remaining cannon and wiped out in hand-to-hand combat.

“I shall never surrender or retreat. Then, I call on you in the name of Liberty, of patriotism, and everything dear to the American character, to come to our aid with all dispatch…. VICTORY OR DEATH”, said William Barrett Travis as he desperately called for reinforcements to protect the fortified mission, just days before the arrival of General D. Antonio Lopez de Santa Anna’s Mexican forces on February 23, 1836. The Alamo, originally named the Mission San Antonio de Valero, was established in 1718 as a Spanish mission intended to teach native Indians about the Christian faith. In 1836, Lt. Col. William Travis and James Bowie shared command of the army of Texas volunteers, as they occupied the Alamo in a desperate attempt to stop enemy forces from advancing into Anglo settlements.

The blade is engraved with William Travis’ poignant words “Give me help, oh my country” and has a certificate of authenticity. Only 1,836 representing the year of the Battle of the Alamo. Includes a Glass Top Wooden Display Case and Certificate of Authenticity.