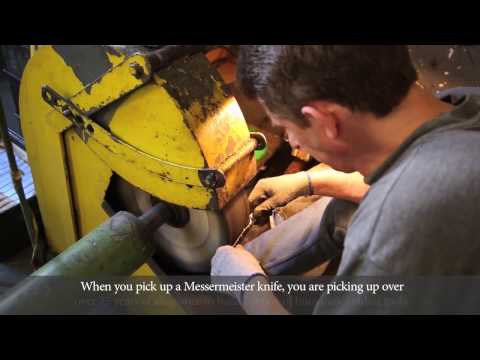 The Chef’s Knife, also known as a Cook’s Knife or French Knife, is the most versatile knife in the kitchen and thus the most used blade style by professional chefs. The broad bladed knife has a spine which gradually tapers to the cambered, cutting edge and creates a pointed tip. Because of this geometry, this is the one knife that should be well balanced with weight distributed equally between the handle and the blade. The Chef’s Knife is the flagship of cutlery. The blade is shaped so that it can peel, trim, slice, dice, chop, mince, vegetables, fillet fish, and cut meat. Each part of the knife is designed to perform a different task. It is the flagship of cutlery. The alternating kullenschliffs (a.k.a. kullens, hollows or Grantons) on each side of the knife reduce drag and prevent items from sticking to the blade.

The Meridian Elite series feature one piece fully forged blades of high carbon, molybdenum vanadium no-stain (stainless) tool steel. Hand sharpened and polished, the blades have a bolsterless Elite edge for incredible sharpness and cutting performance. The handles are made of POM (Polyoxymethylene) riveted directly to the full tang for balance and strength. Each knife is individually gift boxed. Made in Germany.