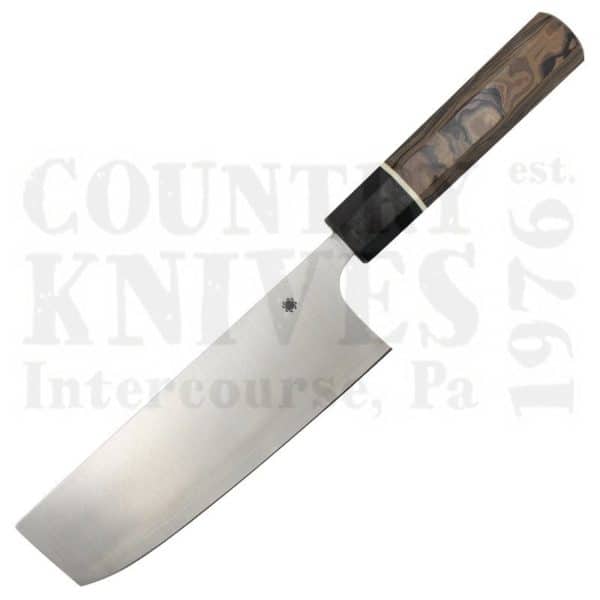 7¼” Nakiri — Meaning “vegetable cutter,” this knife’s unique rectangular shape and slightly upturned edge make it the perfect tool for precisely push-cutting all kinds of vegetables. The Nakiri’s blade shape also allows its length to remain consistent after years of sharpening.

Nothing magnifies the skills of a chef more than extraordinary tools. And when it comes to kitchen knives, none are more extraordinary than those crafted by master bladesmith Murray Carter.

Through an unprecedented collaboration, Spyderco has faithfully translated the meticulous craftsmanship of Carter’s exquisite handmade patterns to a breathtaking series of production knives known as the Murray Carter Collection. Manufactured in Japan to Spyderco’s exacting quality standards, this formidable family of knives showcases Carter’s highly refined expressions of five traditional Japanese kitchen knife patterns and will be available in three different tiers. Forged by tradition and built by Spyderco, the Murray Carter Collection is your key to the ultimate cooking experience.

Itamae Series –
Literally meaning “in front of the cutting board,” Itamae is an extremely prestigious title reserved for highly skilled sushi chefs. Consistent with that elite status, the Murray Carter Collection’s Itamae Series—the highest tier in the Collection—proudly features premium materials and uncompromising craftsmanship. The blades of Itamae Series knives are expertly crafted from laminated steel consisting of an Aogami Super Blue core clad between layers of SUS410 stainless steel. This classic three-layer construction allows the outer layers to protect and support the ultra-hard carbon-steel center layer that forms the blade’s edge. Ground exceptionally thin and straight for unparalleled cutting performance, the blades also feature Murray Carter’s signature “Carter Elbow”—a distinctive taper from the spine to the point that reinforces the blade’s tip. The elite blades of the Itamae Series are paired with traditional “wa-style” (octagonal) handles made from stunning burl G-10 (a durable fiberglass and epoxy laminate) and highlighted with black G-10 ferrules. Created for those who demand the very best, the Itamae Series faithfully captures the spirit of Murray Carter’s coveted handmade knives and sets a new standard in high-performance kitchen cutlery.

MURRAY CARTER-
A native of Halifax, Canada, Murray Carter fell in love with Japanese culture as a teenager. At age 18, he visited Japan and met Sensei Yasuyuki Sakemoto, a 16th-generation bladesmith whose lineage originated with some of the most revered sword makers of Japan’s feudal era. Carter’s remarkable relationship with Sensei Sakemoto ultimately led to a demanding six-year apprenticeship and an additional 12 years of experience as a village bladesmith in Japan. Now the official heir to a 420-year-old family tradition as the 17th Generation Yoshimoto Bladesmith, Carter is regarded as one of the world’s leading experts on Japanese kitchen cutlery. A prolific knifemaker with well over 25,000 custom blades to his credit, Carter realizes that he will never meet the insatiable worldwide demand for his handmade knives. To make his elite designs available to a broader audience of cooking enthusiasts, he decided to partner with another legendary presence in the cutlery industry that also has deep ties to Japan’s premier knifemaking resources—the Spyderco knife company of Golden, Colorado.