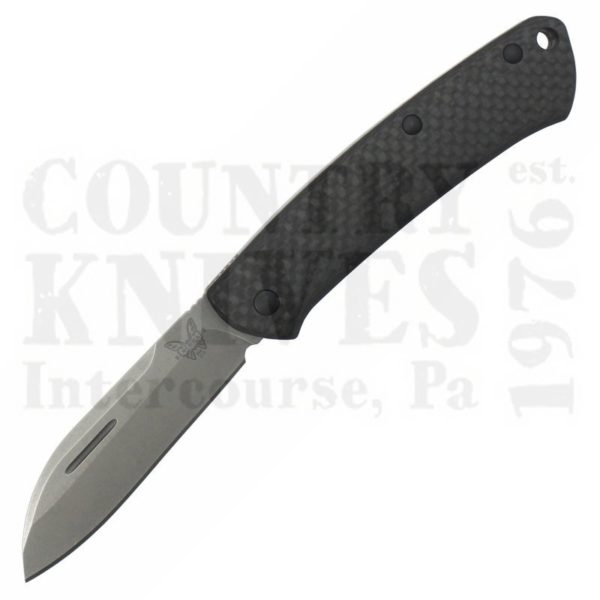 It’s easy to get caught up in the nuances of mechanisms, designs, and technologies as a manufacturer these days. With such rapid growth throughout the industry, Benchmade has come to enjoy new opportunities to take a step back and infuse traditional designs with modern technology and material on a production level. For those that have grown up with a knife in their pocket, some of these modern classics can invoke a sense of nostalgic value, while checking all the boxes regarding technological advancement.

Slipjoints are one of the most time-honored folding knives in existence. Characterized by a strong backspring that influences the blade towards an open or closed position, these knives generally have a series of detents and smaller overall profile. Due to the lack of a standard locking mechanism like many current folders, slipjoints are often legal to carry in countries with strict knife legislation making them a popular alternative for knife enthusiasts around the world.

Benchmade’s initial release of the Proper families consisted of both G-10 or linen micarta handle materials, and a choice between a clip point or Wharncliffe CPM-S30V blade. In addition to the standard production Propers, there has also been one Limited Gold Class variant (318-181), and a Limited dealer exclusive (319DLC-1801) since the platform’s release in 2017. Having seen the success of Benchmade’s first slipjoints over the past two years, their team wanted to dress up the platform with a production model that boasted premium materials not commonly found among modern slipjoints. It’s no secret that they love combining CPM-S90V steel and carbon fiber handle materials, exemplified by the likes of the 940-1 and 484-1.

That being said, Benchmade wanted to give the Proper a similar treatment with the 318-2 and 319-2. Maintaining the same flavors of blade profile and overall size, their team dressed up the design with the aforementioned materials of choice, and included a Flat Dark Earth DLC (Diamond Like Carbon) coating on the full steel liners. Straying from the textbook hue of Flat Dark Earth frequently seen in their handle composites and anodization, these liners give off a shimmer of color similar to that of bronze.

Realizing that slipjoints may not be everyone’s cup of tea, Benchmade’s hopes that in time you’ll find yourself pleasantly surprised by the simplicity and heritage of a design like the Proper. There’s no reinvention of the wheel here, just an honest tip of the cap to a timeless design.

Staying true to blue, the Blue Class represents the heart of everything that is Benchmade. For years it’s been where people have come to expect greatness. Whether it’s folders or fixed blades, the Blue Class knife is designed and built for the individual who appreciates the difference a high-quality cutting tool can make.