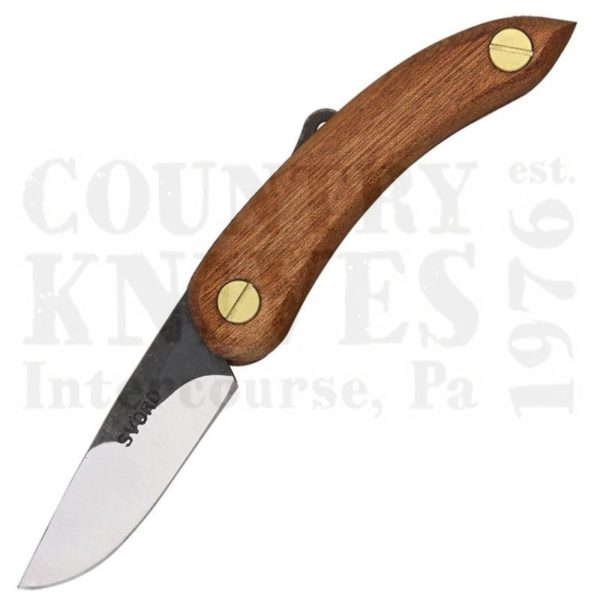 The 2⅝” convex ground blade is made of hardened and tempered 15N20 high carbon tool steel with a Sapele Mahogany handle. The extended blade tang allows for one hand opening. Designed and produced by B.W. Baker of Waiuku, New Zealand. Length Closed: 5½”.

Such an old concept that it’s new; so new that it’s old. B.W. Baker, master cutler, felt that the idea of creating his latest knife range was calling to him from the past. Using old fashioned methods and relying on the oldest low-tech methods, Svord proudly present their Peasant Knife. What does it do? Well, it cuts. Sure, there are knives around today that sprout scissors, sawblades, an entire motor mechanic’s tool kit, laser beams and micro cell phones. Such knives have lost the very reason for their existence – that’s high-tech for you. If you want a knife, a knife to cut things with, the Svord Peasant Knife is for you. If you’ve got style, you’ve got the class to be a first-rate peasant. Peasants are proud. Who actually did anything in history? Royalty? Nobility? Leaders? No way. Peasants carried the day for centuries and they also carried Peasant Knives too. From the days when peasants had pockets, but no money to fill them. Just the knife. The Peasant Knife is based on models used in Bohemia and Bavaria three to four hundred years ago.

It’s easy to use, easy to carry and to open. But, it’s awfully hard to put down. You can open it one-handed. Hang it from your belt or whisk from your pocket by its handy tang. Beautifully simple and crafted from the finest steel, hardened and tempered to a secret formula. All peasants know value when they see it. Beware of imitations! Peasant Knife fun. Tap it open – snap it shut- click it, flick it. Whittle the hours away. Pare your nails. Sharpen your writing stick. Free hostages…. Every hovel should have one (or more!) Remember: “Peasants rule, and your knife’s your tool”. The ultimate exclusive possession! Older than yesterday, but fascinatingly later than tomorrow. By appointment to peasants of the world, from executives to errand boys.