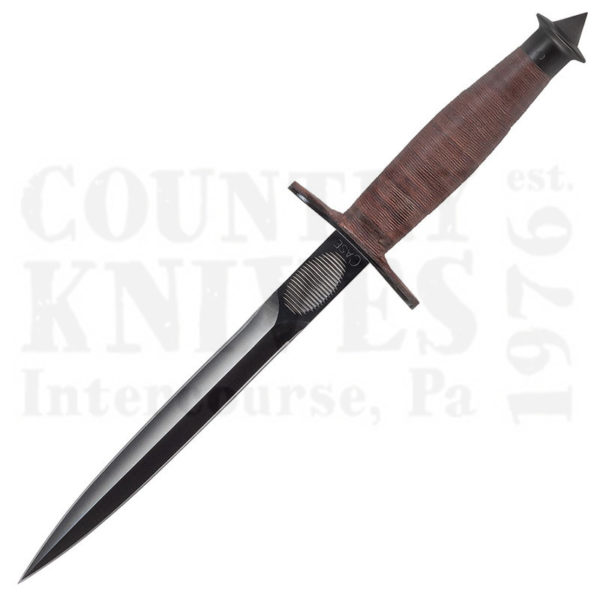 Like the original, the V-42 measures approximately 12½ inches long and weighs 7 oz., features a unique “thumbprint” embedded within the knife’s ricasso, which historically served to help soldiers orientate their blades with a maximum grip. Just below the blued chrome vanadium steel blade is a stacked genuine leather handle, meticulously constructed with specialty gimping. Case’s unwavering attention to detail is also carried through to the knife’s accompanying leather sheath, from the sleeve reinforcing steel teeth to the careful stitching and genuine brass rivet covers.

After years of research and development, W.R. Case & Sons Cutlery Company, one of the world’s foremost manufacturers of premium, hand-crafted knives, is proud to announce the release of its “faithfully true” World War II V-42 Stiletto. Case embarked on this special project at the request of the First Special Service Force Association members, The Special Forces Association Montana Chapter 28, as well as members of the general population’s knife enthusiast community.

US. Army Colonel Robert T. Frederick commissioned the original V-42 Stiletto in 1942. Built exclusively by Case, the knife was issued to the First Special Service Force, a.k.a. “The Devil’s Brigade,” which he founded and commanded. According to official Army records from the National Archives, there were approximately 3,420 original V- 42‟s produced during World War II. The V-42 has since been considered by many as one of the rarest of all WWII fighting knives, and one of the most sought after of all World War II era knife militaria.

Now, some 70 years after the First Special Service Force completed its service in “The Big War,” the image of the Case V-42 remains a prominent symbol, found on the Regimental Crests, unit shoulder patches, and other Distinctive Insignias of the US. and Canadian Army Special Forces. Case painstakingly developed and manufactured the current V-42 reproduction according to the standards of Case’s own original museum piece, with the assistance of members of the Special Forces Association’s Montana Chapter. The knife’s distinctive stiletto blade is double concave ground, yielding the knife’s signature center line along the length of the blade. Other notable attributes include a mark side tang stamp, a leather covered steel guard, a hand worked leather handle and a threaded and pinned-on “skull crusher” pommel, which further emphasizes the knife’s rich and storied history.

“We’re extremely proud and honored to present a reproduction knife that is symbolic of our military elite and the American freedom they fought, and fight every day, to protect,” said John Sullivan, Director of Marketing, W.R. Case & Sons Cutlery Company. “Case knives and the American military share a long and distinguished history dating as far back as World War I so we’ve taken great measure to ensure that the V-42 reproduction model meets the highest standards and is deemed authentic by the same brave Forcemen who carried the original into battle so many years ago.

Ret. US. Army Major John L. Plaster, a US. Army Special Forces Hall of Fame inductee who served three tours with the Studies and Observation Group (S.O.G.) in Southeast Asia, recently evaluated Case’s recreation and described it as “finely crafted.” The esteemed author of six books, including “Secret Commandos,” went on to qualify his review by stating, “This isn’t just another reproduction, but a real V-42.”