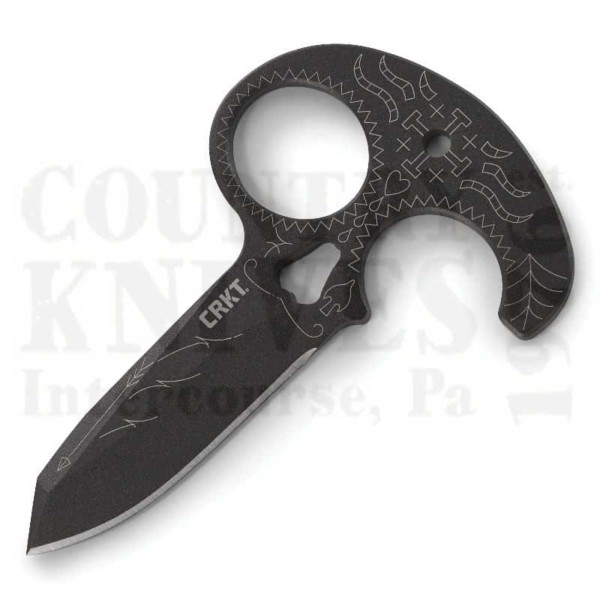 Anyone can throw a punch. Not everyone can make it count when it’s a last resort.

The Tecpatl fixed blade knife was designed by a veteran from his experience in combat situations. Ergonomically thoughtful, in the heat of the moment, it’s hard to tell where your anatomy ends and the blade begins.

Michael R. Rodriguez of Fayetteville, North Carolina designed the Tecpatl as a part of the CRKT Forged by War program. His conviction: a good combat fighter relies on instinct; a great fighter understands the importance of an ergonomically flawless weapon. We’ll take his word for it—he served 21 years in the United States Army and retired as a Green Beret.

The blade of this powerful knife features a black powder finish for corrosion resistance and is complete with a sugar skull laser marking as a reflection of Michael’s heritage and his own personal story. You’ll probably recognize the horns, the Crusader’s Cross, and the Office of Strategic Services Symbol. What you might not know is that Michael served in 7th Special Forces group—he commemorates this with the engraved 7 just above the blade and the arrow that’s reminiscent of the crossed arrows of the Special Forces. Finally, the three lightning bolts pay homage to the Green Berets and their shoulder patch.

This knife is reminiscent of the traditional obsidian close-quarter knife for which the Tecpatl is named, and the multiple hand deployments is what elevates this knife to greatness. It’s solid in the closed-fist position, making it ideal for pushing or slashing. If situations shift or deescalate, the low-profile hold allows you to grab your gun, or assailant, without dropping or shifting the knife’s position in your hand. The Kydex sheath is spring loaded with a MOLLE compatible gear clip so it’s always exactly where you need it.

Even in a world full of sophisticated missiles and UAVs, there’s still no excuse to skimp on your hand-to-hand combat companion. The Tecpatl is first choice for last resort.