To comply with the PA “Yellow Phase” Covid-19 guidelines, please see the procedures listed on our “Customer Service” page before visiting.

Training knives fill a critically important role in personal-defense and law enforcement defensive tactics training. When learning how to defend against edged-weapon attacks, realistic training tools truly get the adrenaline pumping and make the training more compelling. For civilians and duty-bound personnel who regard their knives as potential defensive weapons, good trainers are critical to proper skill development.

In the old days, the only training knives available were either traditional Japanese wooden tanto knives or overly flexible molded rubber trainers, neither of which was very realistic. As knife-oriented self-defense training became more popular, more technically accurate trainers molded from plastic or fashioned from aluminum began to appear. However, all of these trainers were still essentially fixed-blade knives—even if they were trying to replicate a folding knife design.

All that changed in 1990 when a martial artist named Erik Remmen approached Spyderco’s Sal Glesser with the idea of teaching a self-defense class based around the use of their lightweight Delica and Endura models. Remmen, a highly skilled practitioner of Korean Hwa Rang Do and an expert in the martial use of knives, understood the groundbreaking advantages of Spyderco’s CLIPIT designs, especially when it came to deploying a knife from a disadvantaged position. His program emphasized carrying of a pair of CLIPIT knives and developing the skill to draw and apply them from any position to affect a safe escape. His only obstacle was finding safe, blunted training knives that were mechanically identical to their live-blade counterparts.

According to Remmen, “I wrote Spyderco CEO Sal Glesser a letter explaining my concept. At this point in time Sal didn’t know me from Adam. A couple weeks later a package arrived at my door. Inside I found 40 brand new factory dulled CLIPITS, no charge. A note inside said: Good luck with your new Defensive Tactics Training Course, Erik!”

Those were the first “factory-made” folding training knives ever produced. As word of Remmen’s training spread, interest in the unique tools he used in that training also grew, so in 1999 Spyderco introduced purpose-designed training versions of the Delica and Endura Lightweights. Unlike the dulled “drones” we had provided to Remmen, these trainers had full-thickness blunted edges and points and bright red handles to make them easy to identify in a training environment.

As the Delica and Endura designs evolved, their training counterparts paralleled them and were ultimately joined by other folding trainer designs, including the P’Kal and Yojimbo 2. In addition to their use in martial arts and self-defense training, our trainers have also become popular among scout leaders and youth groups as the perfect tools for teaching knife safety. Kids (and adults) learning to handle knives properly start with the trainers to ensure complete safety. As they progress in their knife-handling skills, lipstick or dry erase marker can be added to the edge of the trainer’s blade. Any ink or lipstick marks on a child’s hand would symbolize a “cut” and let him or her know that more practice is necessary before handling the real thing.

Used properly, training knives can be a tremendous asset in safely developing knife-based skills. In fact, some of those skills are literally impossible to master without a folding trainer that offers the same mechanical operation as its live-blade counterpart. Although folding trainers are more commonplace these days than they used to be, it all started with Spyderco’s initial commitment to doing the right thing nearly 30 years ago. 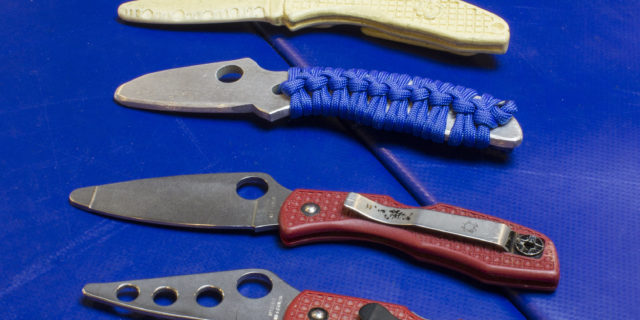 A patina (/pəˈtēnə/) is generally defined as “a surface appearance of something grown beautiful especially with age or use.” The word was first used by Italians in the 17th century to refer to the green film that forms on the surface of copper. The original word was Latin for “a shallow dish,” so the Italian … Read More