The manufacturing of natural handled, traditional, pocket knives was a common business throughout the United States during most of the 20th century, but now, that has become uncommon as there are only a small handful of cutlery manufacturers still remaining in the US. Over the recent years many of the famous cutleries have gone under, and of those that remain only a few actually produce their products on American soil.

At Great Eastern Cutlery, they are out of fashion in today’s world of chain stores and imports; preferring to be known for “MADE IN THE USA”. Their manufacturing company, established in Titusville, PA in 2006, has begun a renaissance in classic traditional pocket knives by recreating the old knife patterns as close to authentic as has been seen in 75 years. Blending handcraftsmanship, with traditional manufacturing processes and a few contemporary machine operations to produce high quality classically designed pocket cutlery. In just a few short years, they have achieved a reputation for craftsmanship and dedication to tradition, and along the way have become a successful American manufacturing company.

Most of Great Eastern’s employees have been with them from the beginning, and are considered part of the Great Eastern family. Over the years they have become highly skilled in the performance of their craft, and rightfully so as they get a keen sense of accomplishment when they see a finished Great Eastern Cutlery pocket knife. Typically, more than 200 individual processes are required, utilizing only the finest materials to build a knife that will look, feel, and perform like an authentic American pocket knife from the late 19th and early 20th century, the golden age of pocket cutlery.

At Great Eastern Cutlery they pride themselves on making classically designed and traditionally inspired pocket knives. In order to better recreate traditional pocket knives they use 1095 high carbon tool steel on all their Tidioute Cutlery, Northfield UN-X-LD, Farm & Field Tool knives. 1095 has many great qualities such as its edge retention, its willingness to take a keen edge, and its ability to take a very high polish. However, if carbon steel is not properly cared for it will rust.

While a growing number of knife enthusiasts enjoy the labor of love that is taking care of carbon steel, they realize there is a demand for a high quality stainless steel alternative. The GEC branded knives are made with 440C stainless steel blades while still being designed and built with the same craftsmanship and quality as our other brands. Like 1095, their 440C is a very traditional blade steel which more than lives up to their highest level of standards.

The informed knife consumer may recognize a GEC by its trademark acorn shield and Cyclops Steel Works tang stamp. 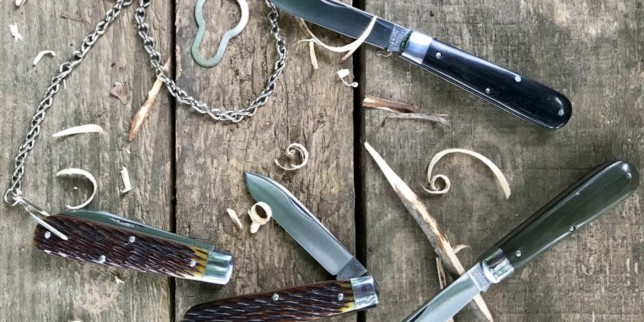