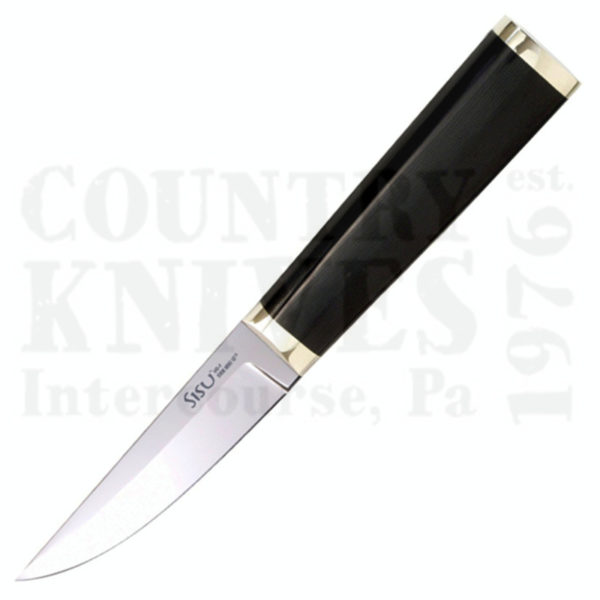 Cold Steel’s President, Lynn Thompson has long been an admirer of Finland and its people. As a sixth grade student, when he did a report on this tiny, but fiercely independent Scandinavian nation, he discovered the Puukko, the national knife of Finland. Eventually he met and married a Finnish girl from a city in the Michigan Upper Peninsula called Escanaba, and now has a whole clan of Finns to call his own. A uniquely Finnish characteristic he admires and tries to emulate that of Sisu (pronounced: siss-sue). Philosophically, it can be roughly described in English as…guts, tenacity, steadfastness, courage, and an indomitable will to succeed and survive. He even has a small plaque above his desk with only this simple word printed on it. So, in honor of his beloved wife, her family, and the entire Finnish people, he has revived and updated a classic Puukko originally designed by Tapio Wirkkala, and christened it, appropriately enough, “Sisu”. Because Lynn feels so strongly about this knife, Cold Steel has spared no expense or labor in its manufacture. The taper ground blade is made from our exclusive VG-1 San Mai III Stainless steel, and given an exquisite mirror polish finish, and a devastatingly sharp edge. A blade this handsome requires an equally attractive hilt. To that end, they settled on using deep black linen Micarta and set it off by a matching, highly polished nickel silver bolster and pommel. To complete this superb example of the knife maker’s art they have housed the Sisu in a traditionally styled scabbard. Made of thick sturdy leather and equipped with an internal synthetic safety liner it is sure to give years of rugged service.